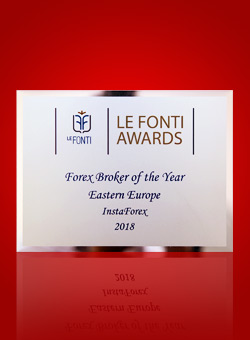 InstaForex wins nomination Forex Broker of the Year for Eastern Europe 2018 according to Le Fonti Awards.

Le Fonti Awards is one of the highest awards in the world in the fields of commerce, banking, and brokerage services. InstaForex was selected by the jury, consisting of over 120 experts. This prize confirms that the company deserves immense popularity among traders around the world. Clients from Asia, Europe, and other parts of the globe decided in favor of InstaForex. The number of actively trading clients surpassed 7,000,000 long ago!

Don't have an account at InstaForex yet? Open and deposit it right now!